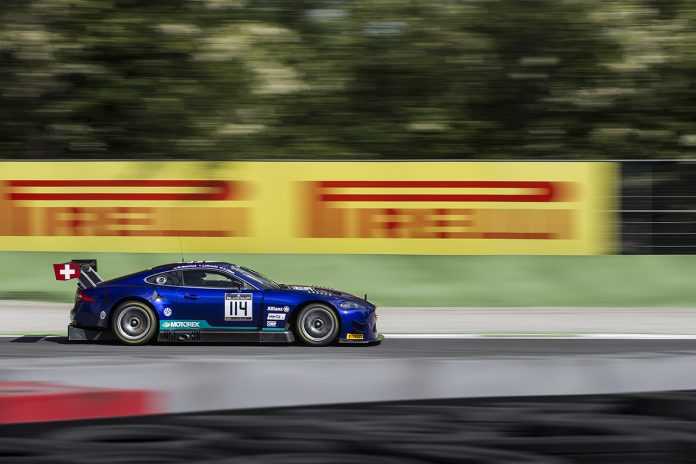 Emil Frey Jaguar Racing experienced a true rollercoaster ride at the season-opener of the Blancpain GT Series Endurance Cup in Monza (Italy). Following competitive lap-times in both Free Practice and Qualifying, the great performance of both GT3 Jaguar could not be converted into satisfying point-results in the three-hours of Monza. After a turbulent race, both cats did not see the finishing line.

The Swiss team set all hopes into the opening round of the Endurance Cup in a bid to end the enduring string of bad luck at the Autodrome Nazionale Monza. The intensive work over the winter paid already off during the free practice sessions and pre-qualifying. With competitive lap-times, Emil Frey Jaguar Racing was able to fight with the big teams. However, due to BoP regulations, the GT3 Jaguar were the second heaviest cars in the entire field of 54 cars.

With P17 (GT3 Jaguar #114) and P22 for the #14 GT3 Jaguar, the hoped for qualifying positions were not met and the team hoped for the race, knowing well of the cat’s strong performance in the long-runs.

Right at the beginning of the race, there was a heavy accident with a number of cars towards the first chicane, in which the #114 suffered severe damage to the left-hand-side of the car. The mechanics used the 30-minute break of the race to repair the damage as best as they could. Despite all efforts, the car did not get out on track at the re-start and lost six laps to the front.

The sister car (#14) was luckier and could start the race again from 22nd position. Ortelli put down a fantastic stint with twelve overtaking moves and handed the GT3 Jaguar #14 to Lorenz Frey from 10th place. Frey also had a strong stint until Albert Costa Balboa took over the car for his stint in P12. A technical problem ended the great drive 45 minutes before the end of the race, with Costa Balboa having to stop the #14 Jaguar in the second chicane out on track.

The sister car suffered bad luck once again: 300 metres after passing the entrance to the pitlane, the car had another tyre puncture front left. Marco Seefried lost a lot of time bringing the car back into the pits on a slow lap. After the tyre change, team-mate Jonathan Hirschi took to the wheel in the #114. But there was a further tyre problem in the following stint and the team was forced to retire the GT3 Jaguar.

“It already started in qualifying, because we didn´t get the results we should have done and were surely beaten below value”, said Jürg Flach, Technical Director Emil Frey Jaguar Racing. “We knew that we would be able to do something in the race, because we tested here twice during the winter and we had very good lap-times especially during the Long-Runs, which we did show in today´s race. I was convinced, that we would improve from our positions in qualifying and work our way up. But the starting accident destroyed the race for the #114, because you could not make up the lost laps. The #14 suffered a technical issue in the engine area towards the end.”

So once more, the team did not see the finishing line in Monza. After great performances and consistently strong speed, the Team from Switzerland did not reach the deserved results.

Stéphane Ortelli (MCO)
“I could see that the green Lamborghini was not spinning, but I could see that it could be a mess so I decided to back-off and actually stop the car. We did lose a lot of positions, we could have even lost more, but it was my choice. At the re-start we were in P22 and I had twelve overtakings and a really good stint. We received great support by the new Pirelli tyres, which I think are very consistent. However, it was mainly down to our hard work over the winter. The car was always strong and we have come a long way from last year. We have also improved on our pit-stops and the team did a great job. I am very proud that we are able to fight against the bigger teams and we are right there at the front. It is a good sign for the future.”

Lorenz Frey (CH)
“After the driver change, I was able to meet the pace of Stéphane and everything worked well on the car. The conditions were not easy today, because there was not much grip on the track. The second pit-stop was very good and quick and Albert was able to drive up into eighth place. Unfortunately, he had to stop the car in the second chicane. Therefore, it was the same as last year when we had to retire right before the end whilst running in the points ranking. It is really really sad, because the car does have the potential to drive in the Top-10. Now we have to prepare the cars for Silverstone, especially the #114 suffered quite a bid of damage.”

Albert Costa Balboa (ESP)
“After the re-start, both Stéphane and Lorenz had great stints and were able to make up some ground. That underlined the performance the GT3 Jaguar is capable of doing. When I went into my stint, everything was normal to start off with, but then I lost power in the engine area and there was also an alarm within the car. The car rolled out slowly and I parked it at the side of the track. It is really a frustrating end to the weekend, because we really hoped for a good result here following the good tests we had during the winter.”

Marco Seefried (GER)
“I did not have much time to react at the start. I simply did not have enough room at the front left. It looked like the Lamborghini stayed on the throttle, because once he came back on track, he caught me again at the rear left. The boys did an amazing job to get our car back out altogether. I did not really know where we were from a speed point of view, but I was really impressed with our pace. The car was more difficult to drive afterwards because of the movement of the front bumper, making it that more difficult to turn into the chicanes. But still, the car had a great balance and we were the sixth quickest car in the field. The second tyre puncture was simply bad luck, but the performance of the GT3 Jaguar was top.“

Jonathan Hirschi (CH)
“After the accident, the steering was bend. We had such a good start to the weekend and in the end it all came different. We did not go back on track after the second tyre failure, because the damage on the car was already quite big and it was a wise decision to stop the race earlier than intended. The team did a great job for the entire weekend. Unfortunately, it is what it is and it is very disappointing, but we are looking ahead to Silverstone.”

Christian Klien (A)
“It is very annoying, because the car has much more potential. We were not able to exhaust the potential during qualifying, and we also had a lot of traffic. The GT3 Jaguar should have been in the Top-10 and it simply shows the great work, the team has put into this during the winter. The race start was pure bad luck and there is nothing you can do about it. Afterwards, the car was bend. Shame, no points despite a great performance, but that makes us hoping for the rest of the season.”

A win and two podium finishes for Ferrari at Monza