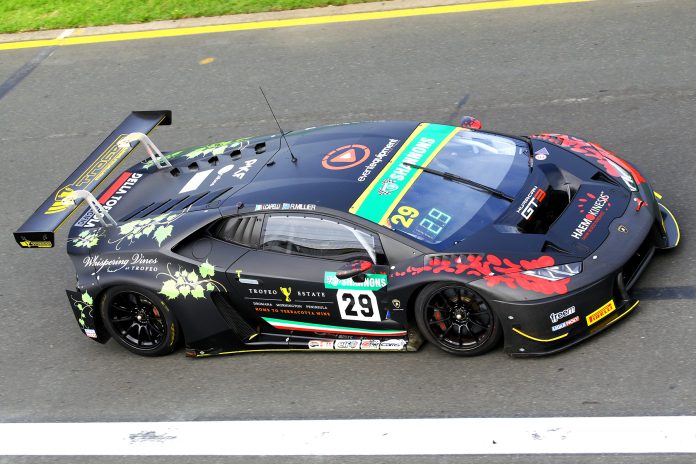 Hot off an impressive top ten run at Mount Panorama during the season-opening Liqui Moly Bathurst 12 Hour, Melbourne’s Trofeo Motorsport returns to Albert Park this weekend for the opening round of the 2018 CAMS Australian GT Championships looking to build on their strong momentum.

For the four 25-minute races, the gorgeous #29 Lamborghini Huaracan GT3 will be piloted by team-boss Jim Manolios and experienced Supercar part-timer and team regular, Dean Canto.

12-months ago Trofeo entered the ‘other-half’ of their successful endurance team, with former Ferrari F1 driver Ivan Capelli sharing the driving duties with Trofeo’s Ryan Millier, the pair running strongly before a technical issue with the brake system sidelined them in the last of the four races.

With a year of experience under their belts, and some pre-Bathurst upgrades to work with (taller and wider front tyres which have eliminated an understeering issue the car had in 2017, as well as a bigger inlet restrictor) have ensured the gorgeous black Huracan has been a force to be reckoned with recently, something Canto showed in fine style during the closing hours of the Bathurst event to climb to eighth position.

For Canto, he returns to the home of the Australian Grand Prix for the first time since 2016 where he ran a Lamborghini alongside Adelaide’s Andrew Taplin, whilst for Manolios, his last on track experience at Albert Park came back in 2010 in a Maserati Trofeo GT3, although he has turned plenty of miles since that time in an array of GT3 machines over recent years and is looking forward to his return.

For Canto, he will be the first to see the circuit during Thursday’s opening 20-minute qualifying session, with Manolios behind the wheel after 3:00 to set his time, but laps are limited ahead of racing, with Canto up for race one at 6:00 on Thursday afternoon, alternating races with the team’s boss before Manolios turns his final laps of the round at noon on Sunday.

And just to make things interesting, the long range forecast for Melbourne suggests rain on both Saturday and Sunday..!

For those of you who can’t make the circuit this weekend, keep an eye on the television guides for live coverage, including Foxtel and Network Ten.

What the drivers had to say;

Jim Manolios
“Albert Park has always been an enjoyable circuit for me, so it will be nice to be back there in the Lamborghini. We ran quite strongly last year with Ivan [Capelli] and Ryan [Millier], but this year it was my turn along with Dean, so we’re looking for a good result. It’s always a challenge though with four short races, a Safety Car intervention can really shorten the day, so with any luck we can enjoy some trouble free racing and continue to work on developing the car.”

Dean Canto
“I like the Albert Park circuit, having done some miles there over the years in Supercars and GT cars. It’s great to be back in the #29 Huracan and carry on the development work we started ahead of Bathurst. It’s nice to be in a current spec GT3 car and to be in a position to battle at the front. It should be an interesting weekend, and hopefully not too caught up with Safety Cars, but I think we’ll do okay, I think the Huracan is well suited to the circuit.”