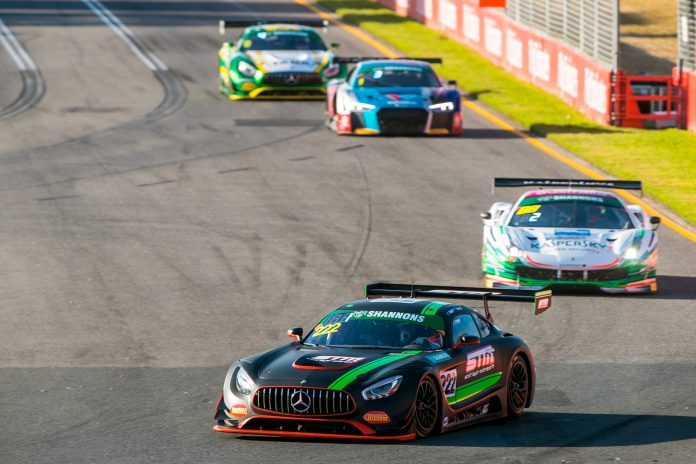 In stark contrast to Friday’s twilight race, the third outing was in pouring rain where Craig Baird led from start to finish.

Saturday’s race began behind a safety car and finished behind one as well.

The treacherous conditions saw Jan Jinadasa (Lamborghini) spin and contact the concrete on lap three, and on the next tour Ash Samadi crashed his Audi.

That brought out the safety car, under which the race was finalised after eight of the eleven scheduled laps.

Tenth and first in Trophy Class was Nick Kelly (Audi) this time ahead of the Audis piloted by Matt Stoupas and Rio Nugara while John Morriss was fourth.

Within that class, the unofficial battle between the Porsche GT3 Cup Cars was claimed by Shane Barwood over Michael Loccisano.

The GT4 Class was taken out be Justin McMillian in the KTM X-Bow, beating Xavier West (BMW M4) and the winner of the previous race, Jeremy Gray (Aston Martin).

Craig Baird: “We made some changes for the wet race and really I wanted to win by more.

“To keep the calibre of Fisichella and Fassler behind me has been the focus this weekend, and so far it has worked out.”

Nick Kelly: “Had a really race with some really respectful bunch of guys.

“I had to be mindful that there were championship cars around me and those I was in front of were not pushy in trying to get past.

“Great to get a third Trophy win, it has been a great weekend so far.”

Wood and Major to front Interlloy Lamborghini at Phillip Island