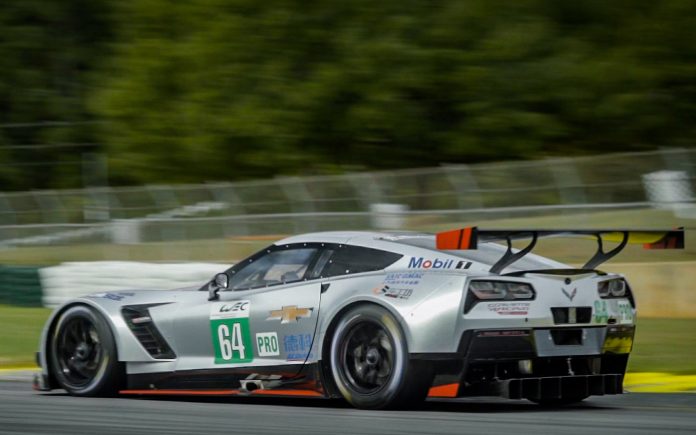 For the entirety of its 20-year run, Corvette Racing has shown itself to be one of sports car racing’s premier programs. The team hopes again to prove its mettle in a completely new environment this weekend.

The Six Hours of Shanghai is part of the FIA World Endurance Championship and represents Corvette Racing’s second event in the series this year – the first being the 24 Hours of Le Mans. Oliver Gavin and Tommy Milner will pilot the team’s No. 64 Chevrolet Corvette C7.R, which highlights Chevrolet’s Redline series of vehicles with a striking silver, red and black livery scheme for the event.

China is the second-largest global market for Chevrolet, hence the special design treatment on the Corvette. The Redline livery showcases a more contemporary look with sleek, stylish and sporty design elements on the exterior and interior of all Chevrolet Redline models.

While the C7.R may look different on the outside, it’s still part of a program that is coming off three straight Driver and Team championships in the IMSA WeatherTech SportsCar Championship’s GT Le Mans (GTLM) class. The competition in the WEC’s GTE Pro category is made up of many of the same manufacturers and teams, so all of Corvette Racing is well aware of the upcoming challenge.

There is plenty to study. The track – a 16-turn, 3.39-mile circuit – will be the 28thh different venue on which Corvette Racing has competed. Gavin has some experience with testing and other non-racing activities at the track, and Milner has driven the circuit on Chevrolet Racing’s simulator.

The Six Hours of Shanghai will conclude Corvette Racing’s historic 20th season of racing around the world. Since 1999, the program has scored 107 global victories – including eight at the 24 Hours of Le Mans – 13 IMSA Team championships, and 12 Manufacturer and Driver titles. It also has completed more than 280,000 racing miles in two decades of competition.

OLIVER GAVIN, NO. 64 REDLINE/MOBIL 1 CHEVROLET CORVETTE C7.R: “I’ve been to Shanghai a number of times but I’ve never competed there. I’ve been there for test days and been around the circuit quite a lot. So I know it very well and I know the area pretty well. It’s certainly a fast track and challenging track. It has an exceptionally long backstraight with a fast, sweeping right-hander onto that straight. It’s going to be a great challenge for us. We’re all looking forward going back to the WEC and be part of that series again. It’s a fantastic championship and it will be a big challenge for Tommy, myself and the whole of Corvette Racing.”

TOMMY MILNER, NO. 64 REDLINE/MOBIL 1 CHEVROLET CORVETTE C7.R: “This will be my first time in China and obviously first time to this racetrack. But we’ve done quite a bit of work in the Chevrolet simulator already to get up to speed. Oliver has been to the track in the past driving a number of different cars. So I feel like we will be ready to go. It’s always something different and something special when you go to a new racetrack – especially this one, which looks really impressive in pictures and on video.”

Porsche 919 Hybrids to start from first and second rows of...