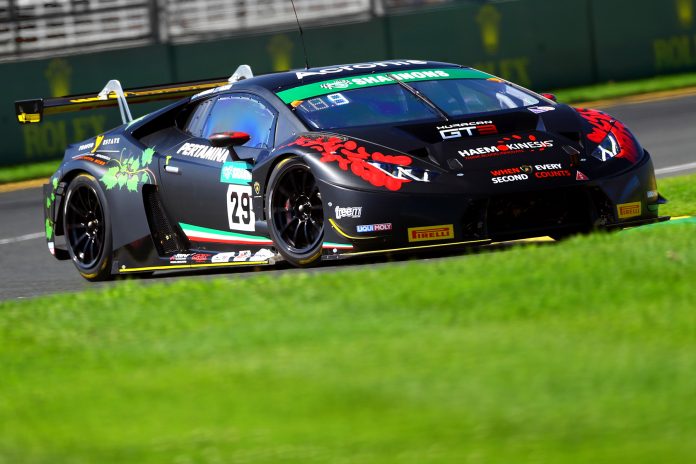 Despite changeable weather at the Australian Grand Prix which had a big affect on the outright results for Trofeo Motorsport during the opening four races of the CAMS Australian GT season, Jim Manolios and Dean Canto showed impressive pace across the event, finishing all four races with the immaculate #29 Huracan right in the thick of the action.

With a tight minute-by-minute schedule, pre-race laps were always going to be a premium, with just two short 20-minute qualifying sessions (one for each driver) to dial themselves in ahead of Thursday afternoon’s opening 25-minute race.

For Dean Canto, he was quickly onto the pace of the front-runners in the outright Championship class, although a couple of off-track excursions showed that the Supercar part-timer was right on the limit, the Sydney-born South Australian ultimately pumping out the seventh fastest time on a last-lap flyer [thanks to a mid-session red flag intervention] to be just three quarters of a second off pole position.

“It was a big lap in the end, with car balance not 100% right, so we had a bit of low-speed understeer and it was a little tough under brakes, so that final lap was not quite 100% commitment because I wanted to make sure I had a good one in the books.”

For team-boss Jim Manolios, an eight year hiatus from Albert Park meant he was going to have to spend valuable time dialling himself back in, but once clear of traffic, he put together his fastest ever lap of the Grand Prix circuit to be ready for his maiden race in the Huracan on Friday, at what is effectively his ‘home’ event.

Frustratingly for the Trofeo team, the opening race was all but decided for Canto before it had even begun. Coming to the line for the start on the inside of row four, John Martin immediately ahead in the Porsche momentarily jumped the start before quickly braking to redress the situation as the field approached the start line. Keen to avoid contact from either in front or behind, Canto jagged to the centre of the circuit, but Martin’s lack of momentum, and Canto’s forward progress saw the Trofeo Huracan just millimetres in front as they hit the control line.

Despite getting to turn one ahead of Martin, the former LMP2 star dived down the inside at turn five with a late desperate lunge, the two drivers making slight contact on the exit with Canto giving as much room as possible knowing full well the team still had three more races to come.

Ultimately a late race incident towards the rear of the field saw a Safety Car intervention, which ended with the race declared after just 9-laps with Canto crossing the line in P6. Frustratingly a 10-second penalty was initially issued for crossing the start line alongside Martin, however this was dropped to just five seconds, which saw a six place penalty thanks to the race concluding with the field all line-astern behind the Safety Car.

Unfortunately Friday morning’s second race didn’t provide any respite from the frustrations of Thursday, with the race postponed for more than eight hours after a road car demonstration immediately prior saw big contact with the barriers at turn three, necessitating a lengthy repair, something which eliminated the AGT timeslot, with the event offering a 7:00pm alternative in the fading light.

Starting towards the rear of the field, Jim Manolios took a cautious approach to the 11-lapper, admitting post race that despite gaining a number of positions on track, that visibility had been difficult.

“The brake markers were impossible to see as light began to fade, so too the apex of some corners, so I was forced to take a safe approach, and followed the lights of some of the cars in front of me, and attack on the straights where it was safer to do so.

“It was disappointing because I had a plan this weekend to improve with every session, and whilst I got to within tenths of my qualifying time, I was looking for more than that, but the car is straight and set to go for Dean in race three.”

Despite warm and dry conditions across the week, Saturday dawned with the threat of heavy rain, and mother-nature duly delivered with a big downpour ahead of the third 25-minute race set for a 12:00pm start.

Off the sixth row, Canto was well placed to make up positions from the lap three start – the first two rotations coming behind the Safety Car – yet despite making up four places, the team were once more slapped with a starting infringement, this time for being out of position on the restart.

“Talk about making it hard for myself,” Canto lamented afterwards. “I was following Tony Quinn around ahead of me, and when we got the start I had pulled out a fraction behind him to see the circuit the spray on track was so bad, but as we got to control line, he backed off quite dramatically, and I shot past him, and was again judged to have crossed the line ahead of the car in front of me, but again a judgement call based on safety.”

Canto went on to claim a couple more positions ahead of another Safety Car intervention for a big accident around turn seven, the race seeing just two competitive laps before it was declared, but with Canto again penalised with cars finishing line astern behind the Safety Car, this time 15-seconds and a 12-place penalty..

Despite the setback, the team were all ready to go for Sunday’s noon start with Jim Manolios back behind the wheel, the experienced AGT campaigner making up a significant amount of ground to pass ten cars across the eleven lap journey, shave three seconds off his qualifying best, and claim an eleventh placed finish in the Championship class.

“I had a ball, but for the second race in a row, chose the wrong line at the start, so saw a stream of cars pass me as we got through the first sector of lap one,” he admitted. “From there though I was determined to make up for the frustration of Friday night, and I was able to systematically pick off one car after another to finish comfortably mid-pack, which was a satisfying end to what has been a challenging weekend.

“All up we’re very happy with the performance of the car. Dean ran brilliantly, and I’m glad he opted for safety in the decisions he made, rather than try to play for points, the result could have been a whole lot different. For us, we’ve collected some more valuable data, and we have a straight car ready to go for our Bend Motorsport Park debut in South Australia in just three weeks time.”

What the driver’s had to say;

Jim Manolios
“That’s the most laps I’ve ever done around Albert Park [laughs]. Look, it has been eight years since I was last here, but certainly I was happy with the performance of the car. Sadly we had a bit of brake fade in qualifying which caught me out at turn one, so that set me back for a couple of laps, but I was getting quicker with each lap which was the aim. Unfortunately race two happened as the sun was setting and visibility was difficult, not quite blind but almost impossible to see the brake markers, so almost a complete waste of time. Sunday though was a completely different matter, it delivered everything I was looking for, some good racing and some valuable laps.”

Dean Canto
“The car was pretty good, although we did learn a couple of things over the weekend with regard to balance that we’ll be able to use in future. It’s always frustrating for the team to put in such a big effort and be penalised for it, but on the flipside, the car is straight, there were no big accidents and we’re ready to fight another day.”