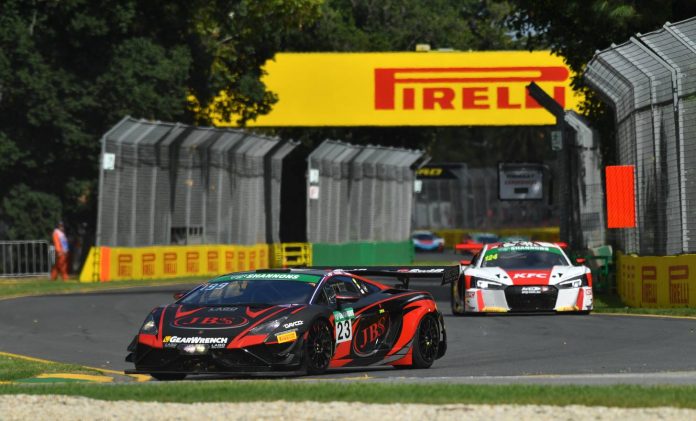 Roger Lago has raced his way to victory in Race 2 at Albert Park as part of Round 2 of the CAMS Australian GT Championship.

Having qualified second, Lago made a strong start to head the field into the first turn in the JBS Australia Lamborghini R-EX, providing him the clear track he used to extend the lead in the early stages.

“I knew that if I stayed with Max that I was probably going to jump him at the start,” said Lago.

“Luckily we got through turn one without any incidents, which is always nice, and then just pressed on because I wanted to get a gap early.”

Lago’s final winning margin was more than four seconds over Fraser Ross, the duo trading fastest times throughout the race.

After starting on pole, his first since Eastern Creek in 2010, Max Twigg tucked into second in the Australian Engineered Flooring Mercedes-AMG GT3.

A blinding start from Fraser Ross saw the Tekno Autosports entry move from sixth to third, shadowing the leaders.

Twigg and Ross then circulated in close proximity for much of the 25-minute race, with Peter Major (PM Motorsport Lamborghini R-EX) making it a three-way battle for the podium.

For lap after lap the battle continued, Twigg positioning the Mercedes perfectly to keep Ross at bay.

Eventually however the McLaren driver found a way through, and set off in pursuit of Lago who had built a commanding lead at the head of the race.

On the final lap, Major also found a way beyond Twigg, taking the inside line into the fast turn 11/12 chicane, though a five-second penalty for a starting infringement saw the Lamborghini classified fifth.

After a strong weekend at the opening round this year, which netted the Lamborghini driver three second places across the weekend, Lago was please to record his first victory of the year.

“I was pretty happy with a four second win,” Lago said. “Sometimes it goes your way!

“We’ve been improving the car all weekend from Quali 1, and a big thanks to Dave Russell, who’s driven this model probably more than anyone, so he’s got a good understanding of where we have to take it as a package.

“We’re improving every session,” he added. “In Adelaide, it would have been nice to win but to finish every race is important if you want to put it together at the end of the year.”

Russell will now step back into the JBS Australia entry for tomorrow’s third race, which will be broadcast live on Channel Ten across Australia at 12:05.