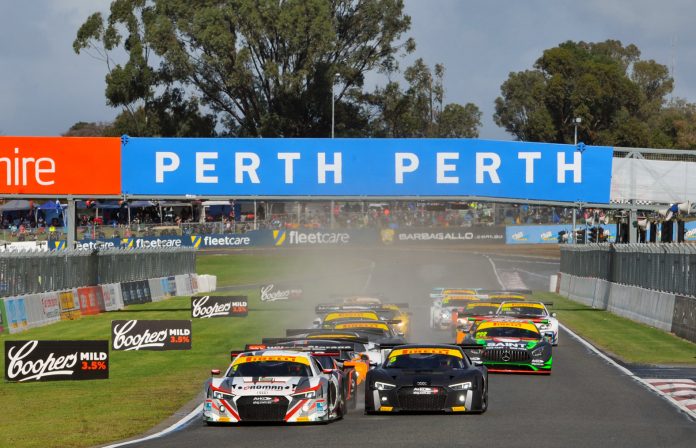 The 2017 CAMS Australian GT Championship heads to Barbagallo in Western Australia this weekend for the third round of the season.

The event marks the halfway point of the 2017 campaign, with Roger Lago currently sitting atop of the Championship standings.

After pairing up with co-driver David Russell in Round 2 at Albert Park, Lago will pilot the JBS Australia entry solo this weekend as he looks to extend his points advantage over Liam Talbot.

Victory at Albert Park for Talbot was the first for MEGA Racing, and the first for the Porsche 911 GT3-R in Australia, which made its racing debut at Barbagallo twelve months ago.

A pre-event test for the Queensland-based will see the team on the front foot as they look to chase down Lago in the Championship, and fend off the likes of Tony Bates and Geoff Emery, both of whom are nipping at his heels.

Less than 20 points separate the Talbot, Bates, and Emery trio, with Bates third in the standings aboard the Moveitnet/AFS Mercedes-AMG, a car which proved successful at Barbagallo in the hands of Scott Taylor and Craig Baird in 2016.

The pairing won two of the four races in Round 2 to take out the round at the Grand Prix, and have claimed two of the season’s three pole positions.

Hometown hero Peter Major will be looking to bounce back after a tough outing in Albert Park, the Clipsal race winner lies fifth in the standings and will be hoping to exploit his local knowledge of the tricky Barbagallo circuit.

James Koundouris and Ash Walsh are also optimistic heading in, with the Western Australian circuit one of Walsh’s favourites.

Together, the Supabarn Supermarkets duo have proved a force to be reckoned with at the front of the field all season, and with the Audi seemingly suited to the Barbagallo circuit they’ll be looking for a strong weekend.

Having released a stunning new livery last week, Max Twigg will hope the emerald green WM Waste Management Services Mercedes-AMG GT3 is as much a standout performer on track as it looks off it.

Approaching his 100th Australian GT race start, Twigg is a veteran of the category, and is in fine form after ending a seven-year pole drought last time out in Albert Park.

Ash Samadi returns at the wheel of the Ah Apartments Audi R8 LMS, while Greg Taylor will also climb back aboard the GT Motorsport entry at the circuit where he sat on the front row twelve months ago.

Bitten by the Australian GT bug at Albert Park, Gary Higgon also returns for his second start in the category in the Kentucky Fried Chicken Audi, partnered once again by the rapid Daniel Gaunt.

BMW will be well represented with Steve Richards and James Bergmuller again sharing the wheel in the #100 BMW Team SRM M6 GT3, while Danny Stuttered returns for his second outing with the team in the DJS Racing entry.

A trio of McLarens will see the British marque well represented, with Fraser Ross aboard the Total/Opti-Coat 650S GT3 and Tony Walls’ Objective Racing entry both inside the top ten in the points standings.

The third entry belongs to Tony Quinn who, having recorded his 100th Australian GT Championship start at Albert Park, will take control of the familiar Darrell Lea backed car.

Set to give the Lamborghini Huracan its Barbagallo debut, Andrew Macpherson and Brad Shiels have reunited for AMAC Motorsport in what will be just the second outing for the squad’s brand-new car.

It makes for another enthralling field of entries, representing many of the world’s leading brands at what will be a crucial round of the 2017 CAMS Australian GT Championship.

Two races across the weekend sees the return of the traditional 60-minute races, with two qualifying sessions determining the grid for the first race on Saturday.

Australian GT track action at Barbagallo gets underway on Friday with opening practice and opening qualifying..

Saturday will then witnesses final qualifying and the first 60-minute encounter, before the final race of the weekend on Sunday.

All Australian GT Championship sessions will be broadcast live on Fox Sports, channel 506.