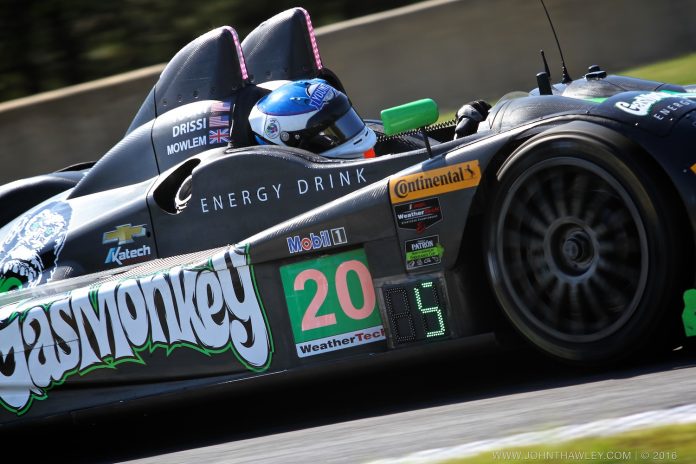 As the IMSA WeatherTech Series prepares to kick off its 2017 Championships, teams are making their annual pilgrimage to Daytona for the winter testing ROAR Before the 24.

“I’m very excited with our line up,” noted team owner, Brian Alder. “Don [Yount] and Buddy [Rice] are paired up for the full season. I think they’re going to do really well together and it’s a big advantage to the team knowing you’ll have two drivers committed to pursuing both the WeatherTech Championship and the Tequila Patron North American Endurance Championship. Obvously, Buddy brings a lot of knowledge and experience to our program.”

“For the ROAR,” added Brian, “we’ll focus on getting Don and Buddy situated on the same page and sorting through the strengths in the No. 20 car’s driver line-up for the 24 hour race later this month. Chapman has been with us many times in the past and has always proven to be a good fit. Gustavo Yacaman was on the podium in PC twice last year, and also participated with us in the ROAR in 2016, so we’re confident in what he’ll contribute. We are really looking forward to the addition of Mark Kvamme. Mark finished the season with four top-5s in PC for 2016, so he’s no stranger to the PC car.”

“I wasn’t sure Johnny [Mowlem] would be back with us,” laughed Alder. “Fans may recall his announcement that he’d be retiring after Petit Le Mans. Well… he’s back, and we couldn’t be happier to see him behind the wheel of the No. 26. Johnny will be joined by Tom Papadopoulos. Tom and Johnny have a considerable amount of experience sharing driving duties together and I expect they’ll be up-to-speed in no time. Adam Merzon ran with us at the 24 in 2016… I’m sure we’ll pick up right where we left off.  Trent Hindman is new to the program, but for a young guy (21) he brings a lot of experience having won three times in the 2016 (3rd overall with six podiums) Continental Tire Sports Car Challenge and as the 2016 Champion of the Blancpain Lamborghini Super Trofeo Nother America Pro Am class.  All four of the drivers in the 26 car tested together in November at Daytona and have already jelled well as a team.”

“Of course,” Alder continued, “none of this happens without the support of our sponsors and partners. I think we’re really fortunate to have partners who continually step up and show their allegiance. We’ve been with several of them for a few years now. Having that support allows us to focus on putting the best equipment possible under our drivers. Gas Monkey Energy Drink is back with us for 2017 and will be prominent throughout the season. Merchant Services Ltd. have been with us since BAR1 was first formed 6 years ago and we’re now in our third year with Southwest Funding. Autosport Designs has been with BAR1 for several seasons and Case-It is back with us for their second appearance at the Rolex 24. Top1 Oil supports all of our programs with both funding and use of their products. It’s great having a partnership with a company who’s products you use. These folks are all important to us and we can’t thank them enough.”

The Roar features three full days of IMSA WeatherTech SportsCar Championship and IMSA Continental Tire SportsCar Challenge action on the famed 3.56-mile circuit, even including a Saturday evening session under the lights. It’s a dress rehearsal for the season-opening 54th Rolex 24 At Daytona and BMW Performance 200 that officially kicks off the action on January 29-31.

The test also includes the Continental Tire SportsCar Challenge, with a first look at the new Porsche Cayman GT4 Clubsport that will debut in Grand Sport (GS) competition.

Roar testing begins at 9 a.m. on Friday with the first of two one-hour sessions for the Continental Tire Challenge. WeatherTech Championship teams test from 10:15 a.m. – noon and 3-5:30 p.m.

Following the Roar, competitors in both series return to Daytona for the season-opening Rolex 24 At Daytona, with opening Continental Tire Challenge and Ferrari Challenge practice on Wednesday, Jan. 27.

The 2017 season will open on Saturday, Jan. 28 with a live FOX Network telecast of the first three hours of the 55th Rolex 24 At Daytona. FOX Sports will provide 24 hours of live television coverage of the Rolex 24 across FOX, FS1 and FS2 with only a brief, one-hour window late Saturday evening that will not be televised.

The FOX Sports GO app will have 25 consecutive hours of Rolex 24 programming, kicking off live streaming in the U.S. of the entire 12-race WeatherTech Championship season in 2017. The app will simulcast all FOX Sports telecasts in their entirety and will have seven hours of exclusive coverage in 2017.

Racing at Home, Spirit of Daytona Scores Fifth on Rolex 24...