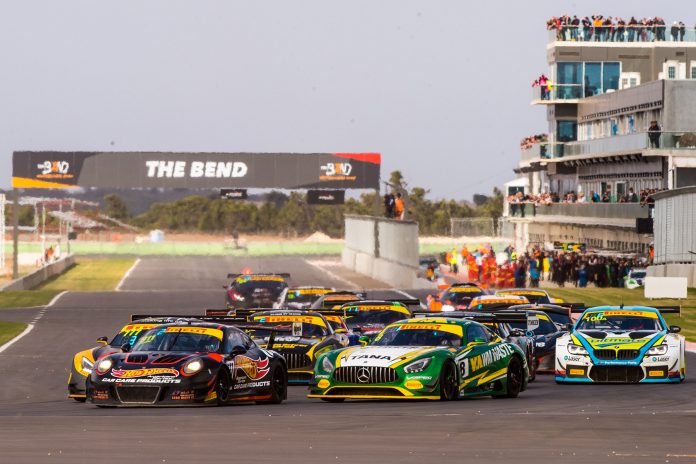 Australian GT competitors will take advantage of an extended and improved media program for the 2019 season, a program which will include both LIVE free-to-air [FTA] television for the endurance rounds – and the Gold Coast – coverage of every session from Supercars events, and LIVE streaming from CAMS Nationals endurance events.
Starting from the season-opening Australian Grand Prix, AGT will receive LIVE coverage of at least one race during the Grand Prix weekend on Network Ten, however there will also be extensive behind-the-scenes coverage to ensure that all the action is covered within the licencing rights of the event.
May’s Barbagallo event, like the Gold Coast in October and the season-finale at Sandown, will all be contested alongside Supercars. Every session will be broadcast LIVE through Fox Sports Australia, with a post-event wrap of the round in a delayed telecast on Network Ten. The Gold Coast event will also see LIVE FTA coverage for the Australian GT races.
Australian GT are also working with Supercars on an extended program that will provide significant additional online exposure through social media.
For the Phillip Island, The Bend Motorsport Park and Sandown CAMS Australian Endurance Championship rounds, exposure will be increased dramatically over past seasons, with LIVE free-to-air coverage on both the Saturday and Sunday of each round, as well as colour stories on teams, drivers and cars throughout the weekend.
Again, LIVE streaming will be in play for online coverage of the event, whilst Australian GT’s social media program will also receive significantly increased exposure through a closer working relationship with both CAMS and the event production team.
Additionally, Australian GT have been working with manufacturers to develop relationships to ensure that AGT events are recognised globally with teams and drivers receiving increased exposure across the 2019 season.
“Visibility is a key aspect of our plan for Australian GT in 2019,” category rights holder Jim Manolios explained. “As part of revamping Australian GT this year, we knew that media exposure was vitally important for our competitors and our partners, and we’d been pushing for LIVE FTA television for quite some time. Together with CAMS and Supercars, we’ve been working tirelessly to find ways to improve the media exposure for AGT, within the obvious limitations of licencing agreements like that in which we – and every other support category – operates at the Grand Prix.
“We’re excited by what the new year offers – the endurance rounds specifically allow us much greater opportunity to introduce and explain the category, and really give fans and the manufacturers opportunities to get more in touch with the sport. This isn’t the end of it either, we’re working on a number of additional programs for the year ahead, and we look forward to revealing them very soon.”
For Australian GT category manager Ken Collier, the 2019 season provides teams with a great opportunity to increase their exposure on a commercial front whilst also providing fans immediate access to the cars they get to see up close at the circuit.
“CAMS have done a fantastic job in improving the overall television package offered to their categories for the coming season. I’m a big believer in live streaming and to now have free-to-air television, and the addition of LIVE coverage from a number of our events this year will certainly be well received by the teams and the fans.
“Media is an important part of the package, and we’re always looking for ways to improve the deliverables for teams and their corporate partners. For us, it also gives us an opportunity to bring the fans closer to the category, bringing them in to show them what the category is like first hand.”
With the opening round of the 2019 season just four weeks away, Australian GT teams are preparing for what promises to be another fantastic season of competition with the addition of new cars, new teams and the return of some fantastic venues that are sure to push the GT stars to new heights this year.
——————————————————–
2019 CAMS Australian GT Championship
Rnd#1 – 14-17 March, Australian Grand Prix, Melbourne, Victoria [SPRINT]
Rnd#2 – 2-4 May, Barbagallo Raceway, Western Australia [SPRINT]
Rnd#3 – 7-9 June, Phillip Island Grand Prix Circuit, Victoria [ENDURANCE]
Rnd#4 – 12-14 July, The Bend Motorsport Park, South Australia [ENDURANCE]
Rnd#5 – 20-22 September, Sandown Raceway, Melbourne, Victoria [ENDURANCE]
Rnd#6 – 25-27 October, Gold Coast, Queensland [SPRINT]
Rnd#7 – 8-10 November, Sandown Raceway, Melbourne, Victoria [SPRINT]
2019 CAMS Australian Endurance Championship
Rnd#1 – 7-9 June, Phillip Island Grand Prix Circuit, Victoria
Rnd#2 – 12-14 July, The Bend Motorsport Park, South Australia
Rnd#3 – 20-22 September, Sandown Raceway, Melbourne, Victoria
Pirelli AGT SuperSprint – 28-29 November, Mount Panorama, Bathurst

Audi on form around the Townsville streets

Twigg/D’Alberto victorious at The Bend