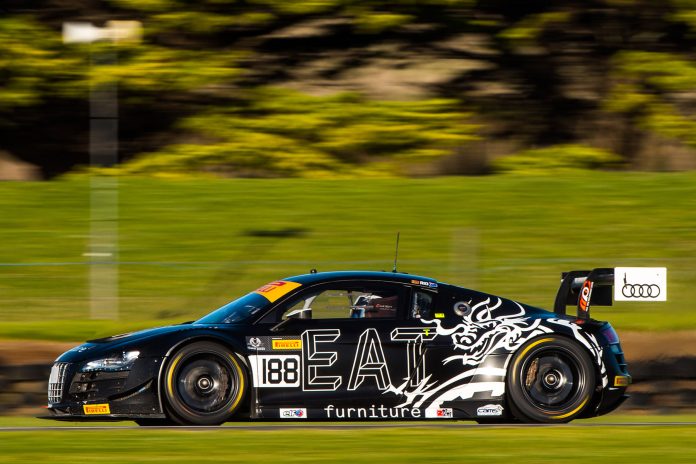 Having developed into one of the leading contenders for the Australian GT Trophy Series in season 2018, Victoria’s Rio Nugara has revealed that he plans to make his full-time debut in the 2019 CAMS Australian GT Championship behind the wheel of a 2019 evolution of the second-generation Audi Sport R8 LMS GT3, carrying on his successful relationship with Audi Sport customer racing Australia.
Nugara was a spirited addition to the 2018 Trophy Series field, pushing fellow-Audi R8 LMS driver Nick Kelly all the way to the season finale, Nugara concluding the season with three outright victories to his name in the stunning EAT Furniture first-generation R8, a car which originally debuted with success at the 2012 Macau Grand Prix in the hands of Edoardo Mortara before coming to Australia where it was campaigned by Marc Cini and Mark Eddy.
For Nugara the transition to the CAMS Australian GT Championship follows a long tradition for Audi Sport customer racing Australia teams who have over the years progressed through the ranks to compete in both the AGT ‘Sprint’ and ‘Endurance’ championships, Nugara laying the foundations for a successful transition with the purchase of Steve McLaughlan’s dual championship winning R8.
“I spoke with Steve mid-year about the opportunity of buying the #1 car used so successfully by Geoff Emery – which at that stage was the reigning championship winning car – and we concluded a deal,” Nugara explained. “Interestingly, it was also the car that Christopher Mies used to smash the GT3 lap record at Challenge Bathurst, so it has a fantastic heritage!
“Like many of the current second-generation R8 GT3s, I plan to update to the new ‘evolution’ specification which is homologated for the 2019 AGT season. The car is an update on the car that already has two Australian GT titles to its name, with modifications to aerodynamics and powertrain to improve handling – it’s also expected to be a faster package than the current car based on it’s improved durability.
“I love my first-generation R8, and I hate to see her go, but she needs to make way for the new car, so someone will be buying themselves an absolutely fantastic car that is a proven performer, right from it’s 2013 debut in Macau.”
Anyone looking to buy themselves a piece of GT3 history, and a car more than capable of contending for the 2019 Australian GT Trophy Series title, should make contact with Audi Sport customer racing Australia in Melbourne on 03 9761 7775 for more details.
Nugara will join at least two other entries from the Audi Sport customer racing Australia stable that will be in 2019-specification, two of them recently acquired by Jamec-Pem team-boss Steve McLaughlan to spearhead the Valvoline backed team, whilst a number of other second-generation cars are expected to feature the dynamic new upgrade.
With the 2019 CAMS Australian GT Championship fast approaching, teams will be out in force ahead of the Australian Grand Prix season opener, with Nugara one of those itching to get back out on track to establish some good testing miles before the rigours of the short sprint race program across the four days of the AGP.
“What an event to kick off the new season,” Nugara admitted. “I’ve always loved motorsport, so I am a huge fan of Formula 1, and to start my new season on the same circuit as the opening round of the 2019 F1 season is very special, especially as it’s in my own back yard!
“I’m realistic about my goals for the year given my relative inexperience against so many of the top teams and drivers, but the Audi Sport customer racing Australia team has been fantastic from day one, and I’m sure they’ll be there right alongside me as I embark on that next step, and hopefully get to the stage where I’m starting to push my rivals along a little.
“This will be a big challenge for me, but I’m looking forward to it, and what promises to be a fantastic season.”
The opening round of the 2019 CAMS Australian GT Championship will begin at the Australian Grand Prix in Melbourne between the 14th and 17th of March.
2019 CAMS Australian GT Championship
Rnd#1 – 14-17 March, Australian Grand Prix, Melbourne, Victoria [SPRINT]
Rnd#2 – 2-4 May, Barbagallo Raceway, Western Australia [SPRINT]
Rnd#3 – 7-8 June, Phillip Island Grand Prix Circuit, Victoria [ENDURANCE]
Rnd#4 – 12-13 July, The Bend Motorsport Park, South Australia [ENDURANCE]
Rnd#5 – 20-21 September, Sandown Raceway, Melbourne, Victoria [ENDURANCE]
Rnd#6 – 25-27 October, Gold Coast, Queensland [SPRINT]
Rnd#7 – 8-10 November, Sandown Raceway, Melbourne, Victoria [SPRINT]
Pirelli AGT SuperSprint – 28 November-1 December, Mount Panorama, Bathurst

Jaie Robson heads championship after Round 1