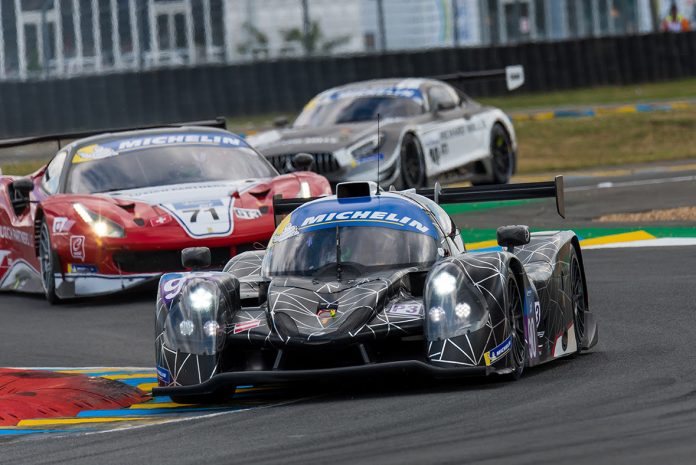 Entered in the 2019 Michelin Le Mans Cup, the AT Racing team is running the #90 Ligier JSP3 over the full season. After two races in Le Castellet in April and Monza in May, and before we meet in Barcelona Spain in just about two week’s time, the Belarussian squad comes back to tell about a very exciting meeting : Road to Le Mans. The third meeting of the season is always very special for the Michelin Le Mans Cup competitors, as it was also for Alexander Talkanitsa father and son.

Alex Junior started from P15 on the starting grid (P14 LMP3) making up two places in the first lap, and another one Lap2. He pitted in L5 to hand the wheel to his father; #90 JSP3 was P12 : “My start was OK, and I fulfilled my objective to gain positions at the start without getting into any trouble. The car was feeling great after we made some small drag adjustments after the qualifying session. It was finally faster on the straight, I could stick to the cars ahead of me. Of course we still missed some power in the straights and in Le Mans, it really makes the difference. The team has done a very good step forward with the car’s set-up. The Safety Car came out (accident of #9 Graff car) and it lasted during 2 laps. I handed the car to my father during the SC period and when the track went GREEN again, he was in the middle of the field and was not able make up for the time loss in his 5 remaining laps. But he was able to be faster than his own qualifying best lap, which is really great news. We finished the race 20th overall, 16th LMP3.” (after the race, stewards decided to add 70 second penalty to nine cars for not having respected the pit entry road, AT Racing is part of them. Therefore the final classification puts #90 JSP3 in 22nd place).

In front of two hundred thousand spectators coming to watch the 24 Hours of Le Mans, the Michelin Le Mans Cup Competitors took a bright and powerful start of their second race of the Road To Le Mans. AT Racing Alexander Talkanitsa Juniorstarted this time from 14th row (27th overall) on the grid, in the very middle of the grid… not an easy start to deal with.But as soon as the green was given to the competitors, Alex managed perfectly the bunch of cars, did not hit anyone and gained 9 places in the 1st lap. He pursued his progression to 14th position, 12th, 11th and finally 10th when he pitted to hand the car over to Alexander Senior. “I knew it was not going to be easy to start in the middle of the field, and my main concern was to stay out of trouble and “survive” to the start… which I did. We changed the set-up of the car for that last race of the week, in order to get additional speed in the straights and found the perfect setting. I had a small touch with another car while overtaking, and damaged a little the front of the car. It was fine to drive for me, but race direction asked us to change it, which we did at the driver change. We lost 1:30 minutes, it’s a pity to end up so far down, but the race was great.”

Alexander Talkanitsa Senior was feeling the same pleasure at the end of the Road To Le Mans Event : “It was definitely much better than any other race since the beginning of the season. I could really sense that special Le Mans felling during Race 2, and had good fun completing very nice fast laps. I just missed my personal target to go under the 4″00 lap, but not for much.”

“I am very happy about our overall results here. We are looking toward endurance racing in the future and Road To Le Mans is a perfect preparation for that. Our main objective was to keep the car on track at anytime – we did it. It was also to not have any accident- we did it. To improve our performance over the week – we did it. This year is very special for us, as it is the first time that we are not linked in any way to a professional driver, until now we could rest on them and the pro drivers were taking some kind of responsibility from our shoulders. Now, this season it’s just the two of us, and we are learning a lot, making the job, setting up the car… It’s a great experience that will make us stronger when we get back to 3-driver line-up in the future. Each result is an additional motivation to improve!“

The next Michelin Le Mans Cup event will be held in Barcelona on July 20th, a new destination for the Michelin Le Mans Cup and ELMS competitors, but not new to the AT Racing driver line-up. “We have competed at Barcelona several times and we know the track very well,” said Alexander Talkanitsa Junior. ” We raced there with the GT Open and also did some formula testing. It is a very technical track where you need a well balanced car. The difficulties we might find there, are overtaking as it is quite tricky, but also the tyre consumption that is crucial on this circuit. We are really looking forward to the next Michelin Le Mans Cup meeting. See you there!”

Encouraging season start at Monza for BE Motorsport