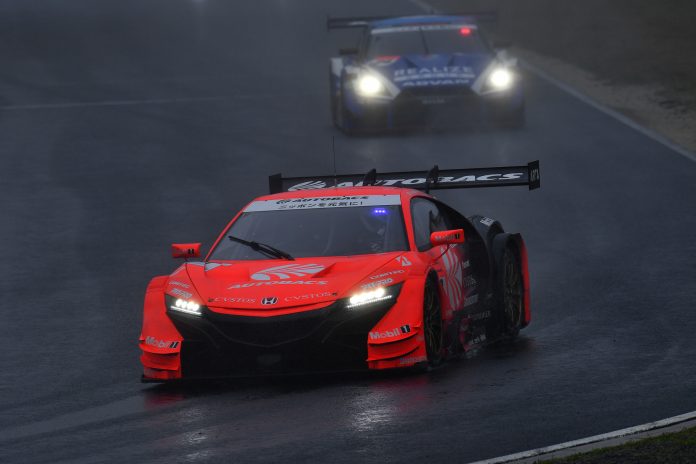 The Okayama GT 300 Km Race, opening round of the 2019 AUTOBACS SUPER GT series, took place at the Okayama International Circuit (one lap 3.703 km x 82 laps) on April 14. With the race held in tough conditions due to heavy rain, the racing had to be stopped twice, and with no improvement expected in the weather, the race was finally concluded after just 31 laps. As a result, the GT500 class win went to the No. 8 ARTA NS X-GT driven by Tomoki Nojiri and Takuya Izawa , and the GT300 class victory went to the No. 96 K-tunes RC F GT3. Because the race did not reach the required minimum lap limit, only half the normal series points are awarded.

Rain fell on the track through the day, and it began falling quite hard just past noon. For this reason, the race was started behind the Safety Car lead, with the cars staying in their starting grid order for the first four laps. The real racing began when the Safety Car withdrew on the fifth lap.

At this point, the 3rd and 4th position grid starters, the No. 1 RAYBRIG NSX-GT (Naoki Yamamoto) and the No. 17 KEIHIN NSX-GT (Koudai Tsukakoshi) moved up at a fast pace and passed the pole-starting No. 23 MOTULAUTECH GT-R (Ronnie Quintarelli) and the 2nd grid position starting No. 12 CALSONIC IMPUL GT-R (Daiki Sasaki). The race then proceeded with cars No. 1 and No. 17 in the lead. After this, crashes be several GT300 class cars cause the racing to be suspended. When the race was finally restarted, the leading cars No. 1 and No. 17 bumped each other slightly and No. 1 ended up running off the track. This left No. 17 in the lead with the No. 8 ARTA NSX -GT (Takuya Izawa ) in pursuit. After that, another crash by GT300 cars cause the race to be stopped again. With no improvement in the weather foreseeable, the race was concluded with the finishing order being that of the running order on the 30th lap. After the race, a 34-second penalty was given to the top-finishing car No. 17 for its collision with car No. 1 that dropped it to 14th place. With this, the 2nd-place finishing No. 8 ARTA NSX -GT (Tomoki Nojiri /Takuya Izawa ) became the race winner. Second and third places went to the No. 23 MOTUL AUTECH GT-R and the No. 12 CALSONIC IMPUL GT-R respectively. Among the LEXUS LC500 cars, the top finisher was the No. 19 WedsSport ADVAN LC500 (Yuji Kunimoto/Sho Tsuboi) in 6 th place.

In the GT300 class, the race in the rain turned into a contest between the two veteran drivers who qualified 1 and 2 for the race and also top the list for most GT career wins, the No. 55 ARTA NSX GT3 team’s Shinichi Takagi and the No. 96 K-tunes RC F GT3 team’s Morio Nitta. Car No. 96 got into the lead, but car No. 55

chased close behind. Eventually, however, the race would be called before any decisive move concluded their battle. As a result, the No. 96 K-tunes RC F GT3 (Morio Nitta/Sena Sakaguchi) team became the first to score three wins at their home track in Okayama. Finishing 2nd was the No. 55 ARTA NSX GT3 (Shinichi Takagi/ Nirei Fukuzumi), while 3rd went to the No. 52 SAITAMATOYOPETGB MARK X MC (Shigekazu Wakizaka/Hiroki Yoshida), giving their team its first podium finish.

■ Winner Comments
No. 8 ARTA NSX -GT [GT300]
Tomoki Nojiri: “I was watching the monitor screen throughout the race. It felt like forever [before the race ended]. More than being happy that we won the race, I’m just glad that none of the drivers were badly injured. Watching the y way [Takuya] Izawa-san grabbed the only possible chances to pass the two GT-Rs, I thought that no one else but he could have done that. This is surely a victory that we owe to Izawa-san and the team and to Honda and Bridgestone. It was everyone’s victory.” Takuya Izawa: “Since I was starting from 5th position on the grid, it was a terrible screen of water being kicked up [by the four machines in front], so I could barely see a thing and had no idea where I was running. I somehow managed to pass the two GT-Rs in front of me in the early going, and I think that is what led to this win. The fact that we ended up winning after the post-race decisions was due to the collision between the two other leading Honda NSX-GTs, so personally I have mixed feelings about today’s outcome, but I’m going to just accept it as a good start to the season.”

No. 96 K-tunes RC F GT3 [GT300]
Morio Nitta: “I’m glad that we won, but today was really a tough race. Because I started from 2nd position on the grid, the water screen made it hard to see the condition of the track. But when I was able to get into the lead after [Shinichi] Takagi-san in car No. 55 made a little driving mistake, I could finally see what the track was like. There weren’t any real battles going on after that in my vicinity, but after the Safety Car came out and we were running slow, I saw some of the crashed cars and realized how tough it must have been out there for the others.” Sena Sakaguchi: “I didn’t run in today’s race, but I think I made a contribution to the team by helping to get us a spot on the front row of the starting grid in yesterday’s qualifying. After [Morio] Nitta-san started the race, I couldn’t take my eyes off the monitor screen in the pit. I have never felt time passing as slowly as it did in this race. The moment when Nitta-san passed Takagi-san, I knew that was the only point where he possibly could have done it. I just simply thought, “Amazing!”

Fuji : ZENT CERUMO LC500 team comes from behind for the...