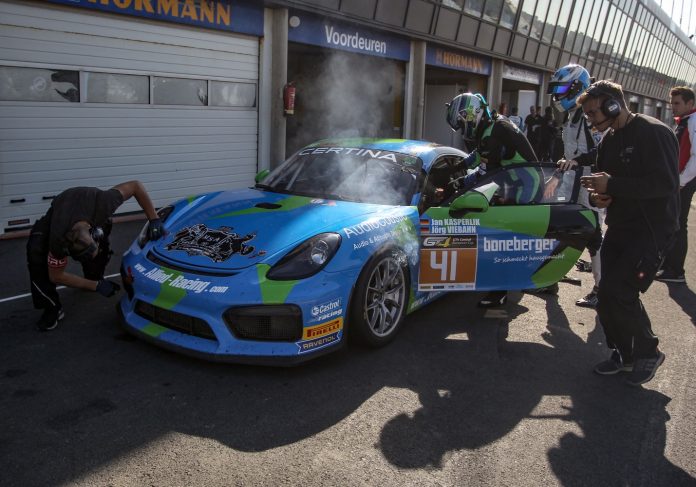 With a double win in the GT4 Central European Cup finale in Zandvoort, Allied Racing with Dutch driver Rob Severs landed the championship title for the 2018 season.

Circuit Park Zandvoort in the Netherlands presented a challenge this past weekend. Passing opportunities were severely limited on the 4.320 kilometre course due to the tight chicanes, which is why qualifying had a considerable impact on the race results this time around. Allied Racing’s junior Nic Schöll got pole position again on the weekend. Together with Rob Severs, he skilfully realised a start-to-finish victory on Saturday. This was followed by another win on Sunday. The two races went less favourably for the duo of Kasperlik/Viebahn and they were beaten by the competition.

“Little” Nic’s performance was convincing all along the line on Saturday morning, when he burned the fastest time into the Netherlands asphalt after just two laps. None of the other drivers managed to outdo the fast junior in the following ten minutes of qualifying. The youngster got pole position.

Jan Kasperlik, heading for the starting line with Jörg Viebahn this weekend, got the sixth-fastest lap time and thus headed into the race from the third starting row.

When the starting signal turned green on Saturday at noon, Nic Schöll pulled ahead of the pack after just a few curves and established a respectable lead. Jan Kasperlik, who is known for his fast starts, once again thrilled the spectators with his performance: he was already third in line in the third curve and then passed the car in second place. “An excellent start! Naturally I thought we would carry away a double win when I got to second place,” is how he later described the situation. “But there was a bit of contact while passing the second place car, so the Porsche got damaged and was difficult to keep on the track after that.” Nevertheless, he managed to keep his opponents in check with considerable effort. Kasperlik passed the wheel over to teammate Viebahn in second place, who was subsequently struck twice by competitors and later took a drive-through penalty. He crossed the finish line in eleventh place overall.

Rob Severs on the other hand, who took the wheel from Nic Schöll, perfectly carried through the start-to-finish win when he saw the chequered flag in first place at the end of the one-hour race. Beaming with joy, he and Schöll accepted the trophy in front of a jubilant team. This catapulted Severs to second place in the championships with only five points separating him from the leader.

On Sunday, Severs/Schöll started from position six with only one goal: a second win at all costs, since any other position would have meant only the vice championship. Rob got off to a fast start but did not get very far ahead. The Netherlands course makes passing difficult with its tight chicanes. Viebahn on the other hand took off like a rocket and moved up to third place before the first curve. Unfortunately, he made a mistake in approaching the second-place KTM, touching the KTM and getting a drive-through penalty as a result.
Things got confusing towards the middle of the race. The safety car had to come out during the driver change while a car was standing unprotected in the gravel. Pure drama: #43 with Severs on board unfortunately came in before the safety car – #41 in the safety car phase. #41 then came back out as fourth overall. #43 was in the lead, although sadly having completed one lap less, but racing management recognised this so that #43 with Schöll behind the wheel was permitted to pass the safety car and line up at the rear in last place. 15 more minutes followed, moving up from position 13 to 1st place and winning us the championship title. Kasperlik advanced as well: he bore the heavy legacy of a loose front bumper, loose fender and misalignment. Only with a considerable loss of speed was he able to keep control of the vehicle. In the end it was enough for him and teammate Viebahn to come in fifth place. The duo even earned third place and won a trophy in the AM rankings.

Nic crossed the finish line first and not only made the weekend perfect with a double win, but also helped his teammate Rob Severs earn the championship title.

Rob Severs stepped up onto the podium as the GT4 Central European Cup Champion 2018 on Sunday. Beaming with joy, he was warmly welcomed by the team.

“A difficult season with a forgiving conclusion”

This is the first championship title in a GT4 series for the Allied Racing team. After a long season, it proves that the Bavarian team from Huglfing can play in the big leagues. The title is thus a reward for the drivers and crew who consistently gave their best during the entire season.

Team leader Jan Kasperlik: “Congratulations to our Rob. He improved throughout the season and laid down a top performance at the very end. With Nic by his side, he has truly earned the privilege of calling himself Champion today. Thank you to the entire team, who gave it their all throughout the season just like the drivers. Motorsport is a team sport. The performance of the whole team was outstanding. Since the DTM finale is still on the programme however, the actual, extensive celebrations will have to wait until the SRO Night of the Champions in London on 24 November 2018.”

Pedal to the metal at the end of the season

Allied Racing is far from finished with the end of the 2018 GT4 Central European Cup season: the team is heading for the starting line in the unique GT4 Sprint Cup this coming weekend as part of the DTM in Hockenheim.