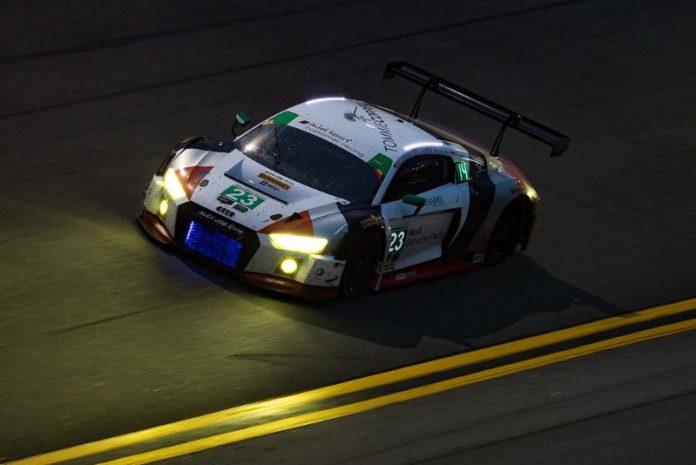 Bell was behind the wheel of the No. 23 Audi R8 LMS GT3 heading into the final hour and 40 minutes of the race. At that point, No. 23 Audi was running seventh, two laps down to the GTD race lead. If the team had any chance of finishing on the lead lap, or contending for a GTD class win, it was going to need some help in the late stages of the race.

With just under an hour to go, the team got some much-needed help when race’s 20th caution flew for the No. 20 Prototype Challenge car. This allowed Bell to get a wave by that put the No. 23 machine only one lap down, but still in seventh place.

As luck would have it, Bell moved up another position to sixth with about 25 minutes remaining. This happened when the No. 93 Acura NSX GT3 brought out the race’s final caution. But, the team simply ran out of time to get back on the lead lap and contend for a class win. The team still finished sixth despite being five laps down with six hours remaining in the twice around the clock race.

“It’s a great event,” Bell said following the race. “We fought to overcome a lot of early mistakes. To finish sixth is about the best we could do. You have to be please with that. We’re still learning the car. I think the more we understand the car, the stronger we’re going to be. I’m glad that everybody kept fighting and stayed calm.”

“The Rolex 24 is always a roller coaster,” Sweedler said. “There are highs and lows, and we had everything this time. The key to this race is no mistakes. And, unfortunately, we made a couple. That’s just the nature of the beast here. Even the winners make mistakes. It’s who makes the least mistakes [that help you win]. My hats off to Audi, Alex Job, all of my co-drivers, and the entire team. They all did an amazing job. Now, it’s on to Sebring. Let’s go.”

“I think this is a very good result for the Audi family,” Kaffer said. “We started here with three cars and we finished with three cars. We finished with all three cars in the top six. I think this is outstanding for Audi – especially for the R8. I want to thank my co-drivers Bill, Frankie and Townsend. They did a great job. Unfortunately, we had some issues. One less penalty and I think we would have been there to fight for the victory. But overall, I think we’re happy and pleased with this result. Personally, I’m also satisfied because this is the first time I’ve gotten to race for Alex Job Racing. I only know the team from the past. I knew it was a very strong team. I’m happy they have the Audi now and hopefully I can join this team again.”

Cool temperatures and light rain fell on the World Center of Racing to start the final six hours of this twice around the clock classic. This made for some interesting track conditions – too wet for slicks, too dry for rain tires. But, that didn’t stop Montecalvo from putting in three solid, consecutive stints. He started his first stint in ninth, five laps back from the GTD class leaders. When his third stint concluded, he brought the No. 23 Audi R8 LMS GT3 to pit lane in eighth place, only three laps down.

“I think that was the most comfortable I felt in the car,” Montecalvo said after his stints. “I think we took a little bit of a gamble at the beginning [of the stint]. We had no radio transmission so I opted to go with slicks when it was still pretty wet out, which I think all-in-all we stayed out of trouble. It was a smart decision. We made up some time from it. But, it was really hard out there for the first eight laps. It was still really wet and hard to get some temp in the tires. I think it was a really good run in the end.

“It was a really tough race. The rain made it interesting for everyone. The team did a great job. We had a couple of slipups as a team. But, I think everyone did an amazing job getting us back [in contention]. At the end, to be that close with the little mistakes we had, it was very impressive to come back after that. Hands down, I think the team did an amazing job. I’m looking forward to the rest of the season with these guys. It’s amazing how professional everyone is. Bill, Townsend, Pierre, everyone did a great job and I’m really impressed and happy to be a part of Alex Job Racing.”

“It was a good comeback for sure,” Team Owner Alex Job said. “To be a lap down at the checker, after being five, almost six laps down, the drivers and crew did a great job. There were some mistakes early that cost us and put us out of contention. We didn’t have the quickest car. I don’t know that we could’ve contended to win. But, maybe we could’ve contended for a podium. Unfortunately, there were a couple of mistakes that bit us, one in particular. But you know, that’s what this race is all about. The car needs to be prepared at it’s best.

“This race is all about running a perfect race. If you want to win it, you’ve got to have a perfect race. The preparation was perfect. Audi did a fantastic job building the car and giving it to us in such short order. I can’t thank them enough. The crew also did a great job prepping it. And, I also want to thank Bill and Frankie for bringing us this opportunity.”

The IMSA WeatherTech Sport Car Championship next heads to Sebring, Florida March 15-18 for the Mobil 1 Twelve Hours of Sebring Fueled By Fresh From Florida.