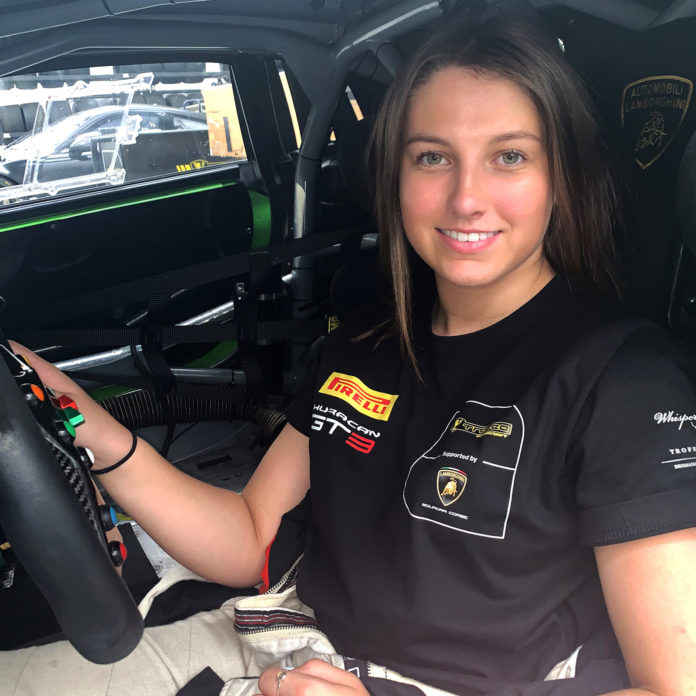 Australian GT will see a new face in pit lane during season 2020 with the announcement that 18-year old karting and production car graduate Tayla Heath will step behind the wheel of the #129 Trofeo Motorsport Lamborghini Huracan Super Trofeo EVO to contest rounds of the AGT Trophy Series in the Trofeo Challenge division.

An accomplished karter who enjoyed immense success in the national championships in 2017, Heath contested the South Australian Improved Production Championship in 2019, finishing second in the Under 2.0-litre category in her Toyota 86, before progressing to a post-season TCR test at Winton Motor Raceway late in the year.

A chance meeting with Trofeo Motorsport led to an opportunity to join the Melbourne-based team in an operations role for 2020, with the teenager doubling up duties with her driving commitments in the stunning green Lamborghini Huracan Super Trofeo – the South Australian the first driver to enter the team under Trofeo’s new young driver development program.
“It’s a dream come true,” Heath admitted ahead of her first test at Phillip Island. “I can’t thank Jim Manolios, David Vervaart and the Trofeo Motorsport team enough for the opportunity to join them for the Australian GT season, especially in such an iconic car.”

Heath is scheduled to drive the Huracan in the Australian GT Trophy Series for which the car competes within the Trofeo Challenge division, with her first event coming hot off the heels of her Phillip Island test, with the opening round of the season at Sandown Raceway on February 14-16.
Under the guidance of driver coach – ex-pat Australian Scott Andrews who is at home briefly ahead of his 2020 season competing internationally in Le Mans prototypes, and the Trofeo team led by 2019 Australian GT race winner Ryan Millier and Trent Levi, Heath turned her first laps in the car at Phillip Island during an open practice day, the team impressed with her mature approach and her understanding of the car.

Amongst a selection of new Supercar teams turning valuable laps ahead of the opening round of their 2020 season, Heath was forced to wait patiently until the middle of the day before gaining her first laps in the car, unseasonal fog keeping teams from turning laps, but once the weather cleared, she was able to gain greater knowledge of the circuit and the Super Trofeo EVO as she turned her first laps of both.

“Obviously I’d done a bit of simulator work on Phillip Island, but those were my first real laps in the car,” she explained. “The Lamborghini was very different to what I’d driven before, but I got more and more comfortable and quicker with each session thanks to Ryan [Millier] and Scott [Andrews], they gave me a great insight into how to adapt what I knew to a GT car.
“The thing that struck me most was just how much grip the car has, and how much speed you can carry into a corner, that was a real eye-opener, but I’m pretty happy overall with how things finished up and I’m looking forward to getting back into the car again under race conditions at Sandown which will also be the one year anniversary of my first ever race in a car!”